Qatar at a Glance

• Qatar is a peninsula of 11,521 sq km located halfway down the west coast of the Arabian Gulf.

• The coastline covers 563 km with shallow coastal waters in most areas and many coves and inlets.

• The terrain is flat and rocky, covered with sand flats and sand dunes. There are some exceptional low-rising limestone outcrops in the north and the west.

• The country is centrally placed among the states of the Gulf Cooperation Council (GCC), which groups it with Saudi Arabia, Kuwait, Bahrain, the United Arab Emirates (UAE) and Oman.

• Qatar’s population in September 2019 was 2,747,282 according to the latest figures released by the Planning and Statistics Authority (PSA).

• Other population centres, apart from Doha, include Dukhan on the west coast, Mesaieed City and Al Wakra in the south, and Ras Laffan, Lusail City, The Pearl-Qatar, and Al Khor in the north. Ras Laffan Industrial City (RLC) is creating a population expansion in Al Khor and the adjoining areas. Projects are underway to provide new housing and amenities in the area.

• The country has a moderate desert climate with mild winters and hot summers. Winter nights can be cool, but temperatures rarely drop below 7°C.

• Humidity levels can be very high on the coast during the summer months.

• Rainfall is scarce (average 70 mm per year), falling on isolated days mainly between October and March.

• The official language of the country is Arabic, but English is widely spoken and understood.

• All official documents (such as visa and resident permit applications) must be completed in Arabic.

• Islam is the official religion of the country, and Shari’a (Islamic Law) is the principal source of legislation.

• The ruling Al Thani family was among a tribal group who had settled at the ‘Gibrin’ oasis in southern Najd, before their arrival in Qatar during the early 18th century. Initially, they settled in Zubara in northern Qatar, moving to Doha in the mid-19th century. The family is a branch of the ancient Arab tribe, the Bani Tameem, whose descent can be traced back to Mudar bin Nizar.

• The name Al Thani is derived from that of the family’s ancestor Thani bin Mohamad bin Thani, who was the first sheikh to rule modern Qatar. 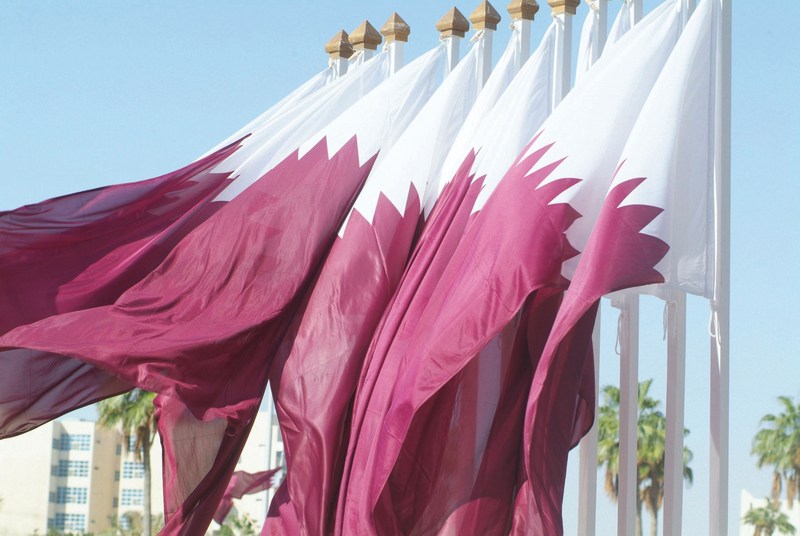 • The national flag is maroon with a broad vertical white stripe at the pole, the two colours being separated with a nine-point serrated line which indicates Qatar as the ninth member of the ‘reconciled Amirates’ of the Gulf, after the 1916 Qatar-British Treaty.

• White signifies the internationally recognised symbol of peace. Maroon symbolises the blood shed during the several wars that Qatar has undergone, particularly in the second half of the 19th century.

• The Amir is the ruler of Qatar. Rule is hereditary, with power transferred from father to son. If no son is available, power is transferred to the person whom the Amir chooses within the
Al Thani family.

• The Amir is the head of the constitutional authorities, holding both legislative and executive powers. The Amir appoints the prime minister and ministers.

• The Council of Ministers (Cabinet), the supreme executive authority in the country, assists in implementing the general policies of the State.

• A 35-member Advisory Council debates economic, political and administrative matters referred to it by the Cabinet.

• The first provisional constitution was issued in 1970, and amended in 1972 upon independence. In April 2003, an overwhelming 96.6% of Qatari voters said ‘yes’ to a draft permanent constitution which became effective on 8 June 2005, transforming Qatar into a democracy.

• In 1999, free elections were held to form a 29-member Central Municipal Council (CMC)
for the first time in Qatar’s history. Women were allowed to vote and run as candidates. The constitution was amended in 2003 to allow for the direct election of 30 members of the Advisory Council. Held every four years, the elections for the sixth edition of CMC was held in April 2019. In accordance with the provisions of Decree No 17 of 1998, a candidate is required to be an original Qatari citizen or to acquire citizenship provided that their father is born in Qatar; to be registered in the voters’ lists in the constituency which they wish to represent, and has a permanent residence within its borders; have not previously been convicted of an offence against honour or trust; is at least 30 years of age; is literate and known for their competence and honesty.

• Archaeological discoveries, inscriptions and artefacts prove that Qatar was populated as early as 10,000 – 8,000 BCE.

• In the middle of the 1st century CE, Pliny the Elder referred to the nomads of the area as the ‘Catharrei’ – an apparent reference to their constant search for water.

•One of the world’s earliest maps, The Map of Ptolemy in the 2nd century CE, shows the word ‘Catara’ at the head of the bay.

• Qatar played an important role in the Islamic civilisation when its inhabitants participated in the formation and provision of the first naval fleet.

• During the 16th century, the Qataris aligned with the Turks to drive out the Portuguese. Subsequently, along with the entire Arabian Peninsula, they fell under the nominal rule of the Ottoman Empire for four successive centuries – with the real power and control remaining in the hands of the sheikhs and amirs of Arab tribes.

• Qatar, with proved gas reserves of nearly 900 trillion standard cubic feet in its North Field, and oil reserves of over 25.2 billion barrels, has one of the fastest growing economies and the highest per capita income in the world.

• In just decades, Qatar has developed into a major global supplier of energy and is the world’s largest exporter of liquefied natural gas (LNG) and a world leader in gas-to-liquids (GTL) production.

• While developing its huge hydrocarbon reserves, Qatar has also diversified its economy, and emphasis is being placed on private-sector industrial development, education, health, sport and tourism.

• Investment laws allow foreign investment in many sectors including agriculture, industry, leisure, tourism, health, education and the exploitation of natural resources, energy and mining – see Trade and Investment for details.

• The Ministry of Foreign Affairs strives to establish and develop close direct ties with all peace-loving countries and peoples of the world. It is keen to participate actively in efforts to deal with the concerns and challenges that the Gulf region encounters.

• Qatar was actively involved in the discussions leading to the foundation of the Gulf Cooperation Council (GCC) and has hosted a number of their Supreme Council Summit Meetings.

Qatar is a member of:

• The United Nations (UN) and its subsidiary global organisations

• The Asian Group of the United Nations Human Rights Council

• The International Monetary Fund (IMF) and the World Bank

• The Organisation of Islamic Conference (OIC)

• Metered taxis and limousines are easy to find and there is a comprehensive public transport system.

• Qatar has a modern road system linking it with other GCC countries.

• An integrated rail and metro network is expected to be largely complete by 2022. See more in the  Infrastructure section.

• The telecommunications system is currently being upgraded to an entirely fibre-optic network.